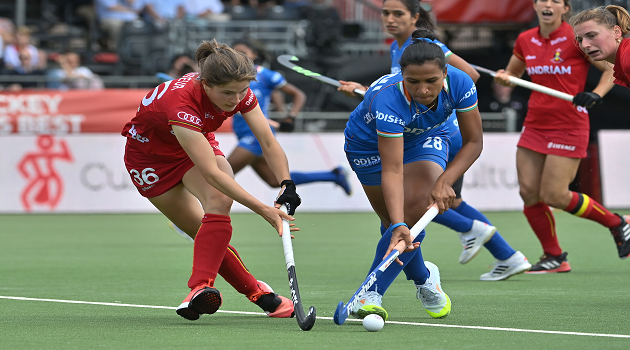 The last time Indian women’ hockey team played Belgium in an international match was way back in 2017 in the Netherlands where they won 4-3. A lot has changed over the last five years, in terms of how both teams have improved in leaps and bounds. And the FIH Pro League India-Belgium match in Antwerp left no one in doubt that hockey was the winner at the end. In a match played at a frenetic pace, Indian eves were quick off the blocks for sure but almost against the run of play, Belgium took an early via a crafy opportunistic goal by their captain and most capped player Nelen Barbara. The goal pushed India on the backfoot.

There wasn’t drastically wrong with the Janneke Schopman-coached Indian outfit, but there were up against a side that was in a tearing hurry to take the game from the opposition. The sheer pace of the Belgium girls and sustained periods of ball control kept India under the pump. The Belgium duo of Charlotte Englebert and Ambre Ballenghien kept the Indian defence busy. The experienced trio of Alix Gerniers, Louise Versavel, and Nelen Barbara ensured their midfield operated like a well-oiled machine and made things tough for India. The Indian backline could not handle the Belgium pressure – they were guilty of blunders not expected of a world number six side. Debutants Baljeet Kaur and Ishika Chaudhary were a bundle of nerves – both ended up conceding penalty corners. Pressure even got to experienced players like Nikki Pradhan and Deep Grace Ekka.

Salima Tete was outstanding for India – she is a captain’s delight – she is a very solid first-rusher during short corner routine, can hold firm in defence, control the midfield and creating goal-scoring passes in the ‘D’. The Jharkhand girl was seen throwing a fight to the opposition amidst the Belgium dominance. Rani Rampal – playing her first international in ten months, tried hard to make a big impression but she was bottled by the smart Belgium defence. Injury-returned Vandana Katariya also had a quiet game. Interestingly, the Indian forwards struggled to have a shot at the Red Panther’s goal in the first three quarters, which speaks volumes of the Belgium defence.

Belgium was sitting pretty with a 1-0 half-time lead and it did appear India needed to take the fight to the opposition in the second half. But all such plans came unstuck as Ambre Ballenghien doubled the lead for the Red Panthers, making the most of a nifty pass from Alix Gerniers. Driven to the wall by the 0-2 scoreline, India mounted a comeback via a dreadful defensive lapse by Stephanie Vanden Borre in the final quarter – Lalremsiami was on hand to pounce on the opportunity to slot it home. India went hard at the Belgiums in the closing stages in a bid to take the contest to a shootout but the hosts snuffed out whatever was thrown at them. Belgium could have easily scored a few more as they hit the crossbar on three occasions.

The match was undoutedly a great advertisement for hockey – something spectators expect to see when they throng the Stadium. 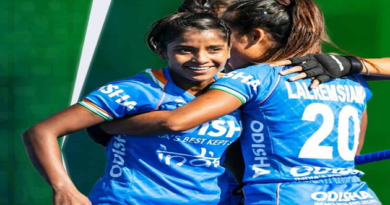 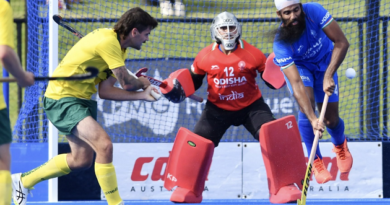